Episode 549: The Ethics Behind Animal Planet’s Saved by the Barn ft. Kelly Holt and Dan McKernan

In the intro to the show Jasmin announces that she’s moving back to New York, so start spreading the news! Jasmin and Mariann also announce their new Director of Operations, Jen Riley. Jen is a long time animal rights activist and organizer and has long been the mastermind behind the Animal Rights Conference. In other exciting news, Jasmin will be speaking at the Farmed Animal Conference E-Summit. This year the summit will be happening virtually. We also continue our Supporting Vegan Businesses program by shouting out the LA Food Truck, Lettuce Feast.

Then, Jasmin speaks with Kelly Holt and Dan McKernan, stars of Animal Planet’s Saved by the Barn and founders of Barn Sanctuary, in Chelsea, MI, which has rescued around 400 farmed animals from abuse and neglect. They launched Barn Sanctuary from Dan’s family farm after the decision to go vegan inspired them to look into the treatment of farmed animals across the world. Their mission is to give their rescued animals a safe place to live out the rest of their lives, and with their Animal Planet show, they want to show how wonderful these animals are and how they deserve to not end up on someone’s plate.

Kelly and Dan join us to share why they gave up their jobs in marketing and technology, respectively, to open a sanctuary for rescued farmed animals. They share how the series Saved by the Barn came into being after Dan’s picture of a tender moment with one of the cows went viral, why he rigorously interviewed all of the production companies that wanted to make the show, and the conditions he imposed during filming. Kelly also shares why she feels it’s so important to connect and work together with other farm sanctuaries and organizations to build a collaborative way forward.

Join hostesses Jasmin Singer and Mariann Sullivan on this unique and fun award-winning podcast that focuses on changing the world for animals. 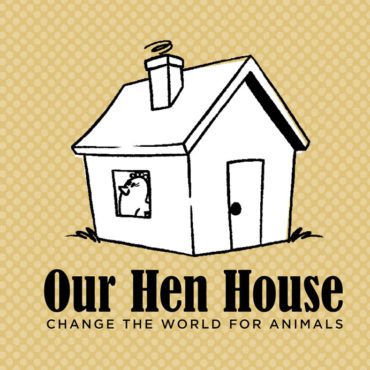 Episode 548: Liz Marshall on her new film, Meat the Future

-This episode is brought to you in part by the Barnard Medical Center. To set up a telehealth appointment today call 202-527-7500 or on pcrm.org. -In the intro to the show, Jasmin and Mariann debate the idea of a vegan …continue

Jasmin starts off the show with how excited she is about a new article, Using Research and Data to Create an Inclusive Animal Rights Movement, which is part of Encompass Essays, the new collaboration among Our Hen House, Encompass and …continue

Proudly brought to you by: Our Hen House 8 August 2020

In the intro to the show, Mariann and Jasmin discuss the huge coronavirus outbreaks at slaughterhouses and talk about some Bloomberg reporting regarding how the meat industry is just not going to do anything about it. They also reflect on …continue

Proudly brought to you by: Our Hen House 1 August 2020